Abigail Tarttelin, star of 'Schrodinger's Girl', 'Taxi Rider' and author of the forthcoming 'Flick' has written a review of my debut novel 'The Intimates' - 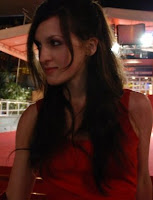 "An intricately wrought and enchanting first novel, The Intimates is a measured, literary piece of work as hauntingly evocative of its setting and characters as Marilynne Robinson’s Pulitzer prize winner Housekeeping. Mankowski acutely and dexterously peels back the layers of his flaw-ridden characters to reveal complexities of desire and influence that whir the cogs within us all. The setting is sublime, an atmospheric country home with a deceased ex-proprietor, a secret passageway and wild, untamed grounds; the story playing out on the evening of a party thrown, at first glance, in celebration of their host’s first published novel. But in some way each of the group is broken, and new author Francoise, who effervesces like a twisted Juliette Binoche seductively from Mankowski’s pages, intends to make her old friends confront their lapsed destinies and lost potential. Will this confrontation be a collision or a catharsis? Will the group be brought closer together or will this evening spell the end for The Intimates?
Mankowski’s real triumph is his ability to transport you to the world of his novel, the words less leaping off the page than ensnaring the reader in their aura, igniting our empathy for the stumbling, well-meaning innocence of its protagonist Vincent. The themes of the novel conjure Ibsen’s Ghosts, yet also register close to home, with a sensitively executed and poignant exploration of maturity, letting go, and living in the shadows of the past.

Mankowski creates an evocative and tangible landscape of missed opportunity and lost innocence, filled with characters at once idiosyncratic and familiar, building to a final act full of surprises. Adeptly rendered and keenly observed, The Intimates is a promising and perceptive debut by an exciting new talent."