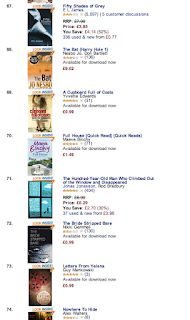 'Letters from Yelena' was today added to the Amazon 'Twelve Days Of Kindle' promotional offer, where selected titles are available as E-books for 99p. Excitingly it peaked at #61 in the 'Bestsellers in Contemporary Fiction' chart. And at one point narrowly overtook 'Fifty Shades Of Grey'- which I would not have expected for a particularly dark novel about a troubled Ukrainian ballerina! Would be great if you could share the link below and help push the novel even higher for this short-lived offer-

Reviews for 'Letters from Yelena' 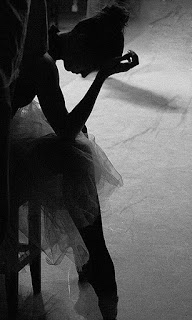 ‘Guy Mankowski has written a truly wonderful novel. Considering that the author is male, he has managed to capture a realistic portrayal of a female ballerina. I found this beautifully written novel a joy to read. Five Stars.’ New Books Magazine

‘Unfolding through the letters between a Ukrainian dancer and her lover, the novel explores art and how people use it in their lives to complex and compelling effect.’ Attitude Magazine

‘A beautifully written story with convincing characters and a good if sometimes heart-breaking plot. Overall, a great novel from Mankowski.’ Novel Kicks Website

‘This epistolary novel takes the always present fascination with the torments of ballet dancers and adds a romantic twist. Mankowski brings every bruises foot and strained limb to life.’ The Simple Things Magazine

‘It’s unusual to find a young male writer who can write with such sensitivity and maturity. Guy Mankowski’s portrayal of the ballerina Yelena is wholly convincing, taking us inside her thoughts and feelings as she describes the course of her life, from harrowing childhood to professional success, punctuated with turbulent emotional crisis. This is clearly a writer of great talent.’ Andrew Crumey, Booker Prize longlisted author.

Guy Mankowski’s second novel, Letters from Yelena, is a fantastic literary achievement, Mankowski creates a captivating, engaging narrative which plucks at our heart-strings. The characters are delicately described. The atmosphere created is tangible. The language pirhouettes, spins, soars: some of the imagery is simply brilliant. It is the most beautifully written book I’ve read this year. Astounding.’ AJ Kirby, author and reviewer for New York Journal of Books


'I felt I was watching a ballet in a darkened theatre, unable to look away until the story had unfolded, so beautifully, before my eyes. From opening this book on Thursday I was unable to put it down until I had finished it. More than that, I was talking about it through dinner, and thinking about it too. It is wonderfully written, and I was fascinated by the world of the ballet.' Best-selling novelist Ruth Dugdall

'I finished Letters from Yelena in two sittings. 'Yelena' has more emotional and intellectual depth in a chapter than the entirety of The Black Swan. Instead it harks back to something like the visual masterpiece of The Red Shoes; romantic, dark, uncompromising, and beautiful. I defy any woman, and any dancer, to not see parts of themselves in Yelena. Exceptionally talented.’ Hanna Jameson, author of ‘Something You Are’