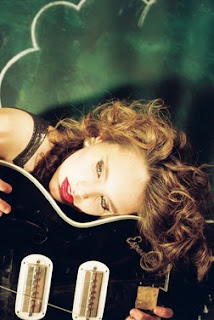 For me, Anna Calvi is the first performer in a long time to have an onstage persona so distanced from her natural self as to be almost unrecognisable. In interviews she’s quiet, thoughtful, always hiding behind a thick mane of blonde curls. Onstage she’s ferocious, snarling, and seemingly on a revenge mission that no number of flamenco scorched blues numbers will absolve. She reminds me of this lady – 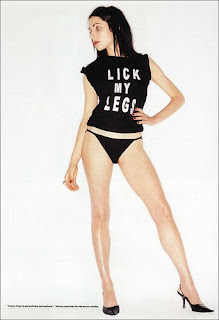 I first fell for her work, after watching a performance of her on the French TV channel Arete. Where bands like Arcade Fire portray the current state of affairs, performers like Anna Calvi offer a means of escape to somewhere more glamorous, which in grim times seems very important. She’s currently fuelling late night writing binges as I try to start my second book. In an age of reality tv ‘stars’ and whitewash landfill indie Anna Calvi is certainly worth cherishing. 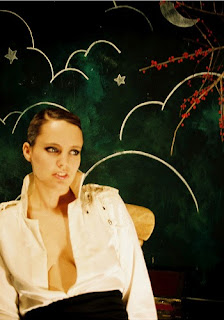 Some advance notices for The Intimates

‘A huge accomplishment. With expert prose Mankowski draws the reader into a world where layers of secrets are slowly and skilfully stripped away. Lyrical and yet accessible, with character dynamics to die for…’ Gary Murning, author of ‘If I Never’

‘Guy Mankowski's debut novel, The Intimates, manages that all too rare feat of being a deeply psychological character study whilst at the same time playing out as a bonafide page-turner. Excellently paced, insightfully created, and with moments of genuine genius, The Intimates is an opulently written, high concept piece which explores the psychology of human relationships, and especially the dynamics of groups. Here we meet characters of genuine depth. Through them, Mankowski explores themes such as the darker side of intimacy and friendship; scadenfreude, jealousy, petty rivalries - but the characters are more than mere ciphers for psychological analysis. They are living, breathing people, whose mutual understanding, whose deep bonds are rooted deeper than the surface difficulties.

This is a novel about the weight of memory set against the lightness of momentary release. It's about the pressure of expectation versus inability to achieve. It's about nepotism and parents setting unrealistic targets for their children. Nobody fucks you up like your parents do, as the old cliche goes, and never is this more true than in the incestuous community which Mankowski creates. But ultimately, this is a tale of redemption, and the consensus seems to be that family doesn't always have to be about flesh and blood. Genuine intimacy can be about more than that. It is also, in the end, a rejection of other ways of life, and in the end, is a justification for the almost old-fashioned intimacy between man and woman. When all is stripped away, and all the talk's been talked, it's about the narrator, Vincent, and his love for Carina.

The book is rich in wonderful imagery. This commentator's particular favourites being the anaolgy of talent as a 'feral beast' (which was simply brilliant) and the stand-alone image of the melting ice-sculptures. Mankowski proves himself as much a poet as a psychologist here. Poignant, truthful, and unflinching in its honesty, whilst managing, at the same time, to be a brilliant reflection of group, and party life. The Intimates themselves are a mighty creation; bursting with glamour but streaked with pain. They are Amy Winehouses in 20's garb with smudged eyeliner, they are fancy-dressing New Romantics seizing all of life by the throat. They are real and yet, at the same time, they are larger than life, which is a pretty good summary of Mankowski's writing, when it comes down to it. Mankowski has a timeless style, highly polished, brilliantly evocative. He writes of things and people in whom we can recognise something of ourselves, or rather, of the magical people we always wished we could be. They're the cool crowd at university, the crowd everyone wanted to be a part of... And yet Mankowski has moved them on a few years, to the time when the first signs of mortality are starting to kick in. With their crow's feet comes terrible self-awareness and the knowledge they might not make of themselves everything they hoped they'd be, and everything the image of themselves which they projected to the world at large, suggested.

The Intimates was the first novel I'd read on my Kindle device, and I kinda worried that by reading it on an impersonal screen, it might take something away from the writing. Nothing could have been further from the truth. On a couple of occasions, I found myself physically trying to turn the page. Mankowski succeeded in transporting me to another world, and his writing proved it didn't matter what the medium was... Simply brilliant." Andy Kirby, reviewer for The New York Journal of Books and author of ‘Bully’.