Live Gigs And Phones: A Q&A With Jehnny Beth of Savages 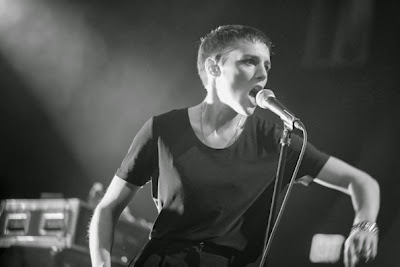 I contacted singer Jehnny Beth about the manifestos she’s written on behalf of her band, the Mercury Music Prize nominated group Savages. I was honoured when Beth suggested us having a Q & A on the subject of phones at live gigs, as her manifestos have recently changed the conduct of audiences…

Guy Mankowski: In one of your manifestos you write that the use of phones, to film and take pictures at gigs, ‘prevents us all from immersing ourselves’. How do you think we have got to the point where people have created such a barrier to immersion?

Gemma Thompson (Savages guitarist, sat next to Beth at the time): I suppose that whilst technology has increased in the last century quicker than any other time, human instincts are pretty much the same as they’ve always been. It is more difficult to have a direct focus, to concentrate on one thing without distraction, people want to be involved in everything, all of the time.

GM: Do you see gigs as places at which there should be no rules, if people are ‘fully immersed’? Where is the line?

Jehnny Beth: The audience always feels your intention, for an hour and a half you are responsible for what happens in the room, they’re not going to do anything out of line with you. So I suppose it all depends on the performer. It's instinctive. We are mediators between the music and the people. We are guiding them towards immersion, they will go as far as we go. 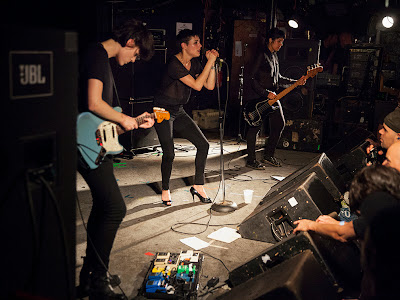 GM: From your experience, what influences how people act at gigs?

JB: Everything from the moment they enter the room, what they experience the same day, or the day before… we cannot totally control it. But there is an important role we can play in order to set the right environment for the gig. From the attitude onstage to the way we address the audience, the music we play when people enter and leave the room, the songs we perform, who we choose as support. On two occasions we asked local choreographers in London and New York City to perform a dance piece on a thirty minute version of our track ‘Dead Nature’ in the middle of the crowd. The idea was to experience the space differently. As people walked in, they were amused and surprised by what they saw.

GM: What capacity do you think musicians have to change these learnt modes of behaviour?

JB: I think we really need to stop thinking so much about money. It always demands more effort and it costs more money to do things differently, and there’s always someone or something to stop you from doing it. The way we have been approaching music is very mercantile and not artistic enough. Musicians have lost their sense of community, everyone is working self-efficiently. We forget music is meaningful and alive to people, so there is a responsibility. Too many decisions are made which contradict these two aspects.


GM: I have noticed over the years that conduct at gigs and festivals has become more regimented. Audience members increasingly arrive with a clear sense of how they ‘should’ behave. I wonder if this influence emanates from corporate sponsors, or elsewhere? 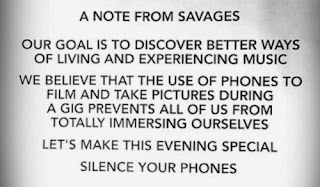 GM: You mentioned to me previously that asking people to not use their phones has allowed them to ‘relax with the idea of engaging with the music.’ Given how primal early punk gigs were, how do you think it has got to the point where there is a need to ask this?


JB: Music and words together have the power to awake people’s consciousness. It is getting harder and harder because, as Alan Moore says, we are entering ‘a culture of steam’. The flow of information is becoming so big and fast that it is impossible to grab anything, including a sense of yourself. We are constantly looking outwards, and there is so little space for introspection. We can easily have access to things that will help us shut down our soul, alcohol, TV, drugs, fear. But the things that are supposed to elevate and emancipate us are getting more and more out of reach. 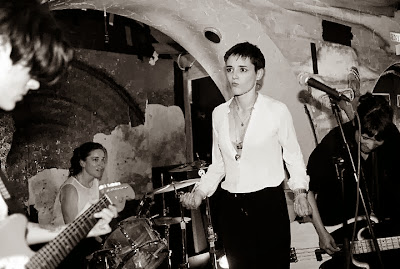 GM: In one of your events at the Ministry of Sound the crowd were placed around the musicians to ‘create total immersion and intimacy’. Did you find this technique useful?

JB: Yes. The idea was to recreate the claustrophobic atmosphere we felt the first time we played in Manchester at a place called the ‘Fuhrer bunker’ where we performed in a wooden cage surrounded by the audience. It was definitely strange and full of tension. At the Ministry of Sound, the audience was placed all around us and we were bathed in a cloud of white smoke. I remember watching Johnny Hostile perform his set before us and getting really nervous. It looked and sounded amazing but we kept thinking “god, we really haven’t made it easy on ourselves, have we?” The show was filmed and broadcasted live. There was a lot camera equipment everywhere, the film crew was very big. In the end it looked more like a TV set than a proper stage, which annoyed me. A lot of aspects about it got out of our control and it freaked us out. I know some members in the audience couldn’t see us very well because of the stage implantation. It was the first time we were doing this kind of thing, but we learnt a lot from it.

GM: When it comes to trying to influence the behaviour of your listeners and audience, how conscious are you of previous attempts by post-punk artists to do so?

JB: Lots of different things came across which influenced us to communicate that way with our audiences. When it came to ask people to restrain themselves from using their phones at gigs to take pictures, we were just using our common sense. I remember having a conversation with the photographer Kevin Cummins who explained to me that when he started taking pictures, it was an honour for a photographer to be invited backstage by a band. Nowadays, bands publish portraits of themselves backstage every day. So times have changed radically, the methods of communication have to change too. Adam Curtis’s documentaries, Genesis P-Orridge ‘Psychic Bible’, the Surrealist manifestos, Alan Moore’s theories about magic… they were all very inspiring for us - but also classical or experimental music records which would have statements written at the back of their record sleeves. In the hardcore scene you can find that sort of attitude towards the audience/listeners too where music is perceived as a way of education.

GM: The music journalist Simon Frith wrote ‘rock and roll apparatus…restructures social life by rearranging the sites at which pleasure can be found and energy derived, at which desire and power are invested and operative.’ In your manifestos you similarly mention how Savages want to ‘help audiences reconnect with your physical and emotional self.’ Why do you think rock and roll can influence such key parts of our lives?

JB: I do believe we surround ourselves with things which constantly take us away from ourselves, and make us very dispersed. We become fluid, like smoke - and I believe art, rock’n’roll included, has this real potential to tell us about ourselves, to make us think of the human condition and ease transitions, make us understand the world we live in, by using humour, violence, sound, words. Enhance our capacity of feelings and emancipation. 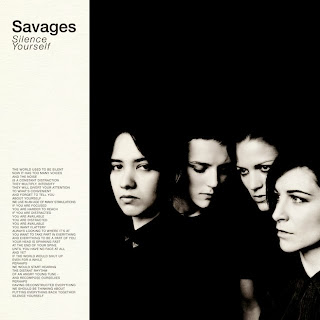 GM: Are there future strategies you think you might use in order to liberate listeners and people at your gigs?

GM: Having reviewed many post-punk manifestos Savages are, in my view, the first band to have successfully altered the behaviour of people at their gigs by using them. Do you think musicians have a duty to be clearer about how their music should be consumed?


JB: Yes, absolutely. I think the musician community should feel confident to establish a conversation with their audience and the business about what they want and what they think should happen for their music. With the internet nowadays, musicians address their audience directly, which I think is great. Now they have the possibility to change the environment of their gigs to exactly what they want. Fans are extremely understanding, if not demanding, of that.