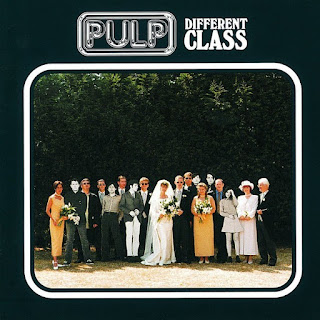 I was surprised today to see that Pulp’s Different Class was about to turn twenty. Surprised, because it marked for me my entry into music. Since discovering that album I haven’t just found music a refuge. I’ve written music, reviewed it, and most recently have written about it, and this album, with its shabby mysticism and splenetic eviscerations of other peoples lives, was the start of all that.

People talk of the glamorous, alien quality of Ziggy Stardust, and I think the most seductive visions in art are ones which we recognise, when we squint. The cover of Ziggy is part of its appeal because its recognisable- it could be the local town hall. It entrances us because we think that with the right attitude and makeup this album could usher us into a utopia for the night. We open the album and in so doing slip into a romantic, glamorous new land. So it was for me with Different Class. Some journalists lack appreciation for Pulp when they talk vaguely of their ‘depressed urban vignettes’. What made Pulp so potent for me was that glamour was mixed in with low-rent reality in a way that was deliciously potent. 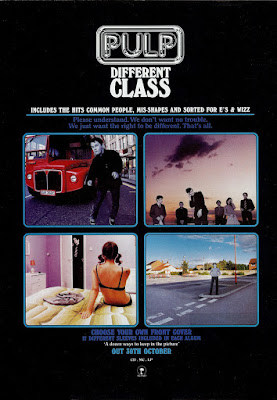 In the late nineties a friend had the Different Class poster on his wall, and as a fifteen-year-old that poster, with its snapshots of black and white band members against coloured reality, hit hard. I identified with that feeling of being intrinsically different, yet trapped in a setting as each band member was in those picture. Steve Mackey looked louche and Wildean (I hadn't yet learnt of how he calmly stole Alex James' girlfriend). Candida Doyle like the wise older sister I never had. The pictures showed Jarvis, left behind on a school trip, and in an evocative café with sullen company. All scenes that I recognised and aspired to. The caption, underneath, seems needy and pleading now but at the time felt earnest and heartfelt:

‘Please understand. We don’t want no trouble. We just want the right to be different. That’s all.’ 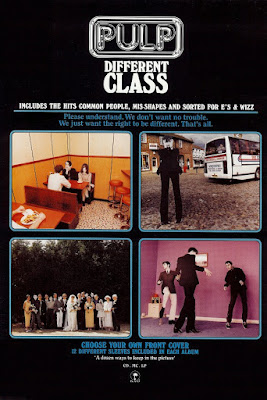 For an odd kid who believed he might be odd because he was creative, but who hadn’t ever created anything this album was manna from a strange, strange land. The friend taped me the album but didn’t bother to write the tracklisting on it. He was far too cool for that. So I made the song titles up. I’m too embarrassed to admit what titles were but I’ll give one example. On a song I would later learn to be called ‘I Spy’ the bitter, revenge-seeking Jarvis sings ‘I know how your mind works / I have studied.’ Being from the Isle Of Wight I didn’t understand the Sheffield accent, and so recorded the song title on my own inlay card as ‘Studded’. Thinking it was some obscure reference to Jarvis perhaps decorating his own leather jacket. 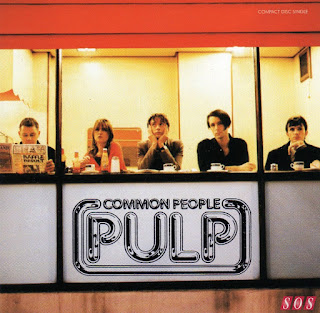 This album was a calling card for The Outsiders, and given that it was released in an era when we still had to strive to get a record, and when a friends record was our record by proxy, that striving made it seem all the more precious. I played that tape to death. I couldn't believe how well the band evoked the low panic of luxury interiors, the pulverising grind of the working week and the anger of frustrated passion. I was yet to experience being needlessly crushed by people in power, and though I felt anger Jarvis captured and anticipated it in a way that was thrilling. In I Spy he sang 'your minds are just the same as mine / except that you are clever swines / you never let your mask slip / you never admit to it / you're never hurried.' It would be years before I really understood what that meant but still, it seemed like he was tutoring me in the cruel ways of the world. From the clarion call of Mis-shapes to the Berlin era Bowie introduction to F.E.E.L.I.N.G. C.A.L.L.E.D. L.O.V.E. it wormed its way into my under-developed heart. I listened to that intro again and again, discovering new layers and textures within a song that tinkled with Horror film pianos, and clattered with distant urban trauma. I imagined Cocker seizing his moment in the studio, putting his all into the centrepiece of an album that would soon allow him to make his mark on the world. 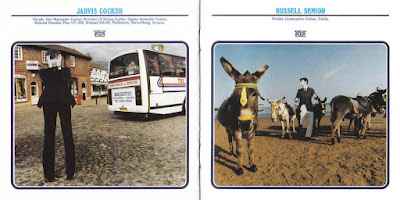 It wasn’t just a calling card to a seam of life I knew to be true- grubbier, sexier, darker, more ambitious than anyone would let on. No, this album actually opened a new seam of reality for me. In which arty young people in vintage clothing pottered meaningfully around in formica topped cafes, savouring hot drinks gone cold and lamenting lost futures. A world in which our lives were lived in pursuit of doomed urban romances. Where women sulked at sodium skylines, tapping at Malboro cigarette, and men plotted in dark corners of lowlit bars. It was now, it was the future. I studied the sleeve notes, lyrics, and listened to the songs so much that it became part of my inner world. Different Class was my manifesto, and it was exquisite to learn that I wasn’t alone. 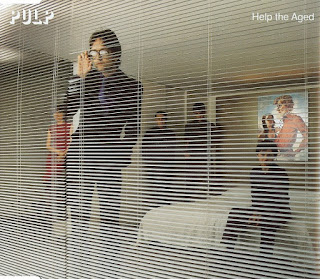 I became disciples of Pulp, and when they returned a few years later with Help The Aged I even pored over the b-sides- the laundromats and seventies blinds described within giving my own crepuscular urban hinterland new details for me to settle into. When TV programs about the 100 Greatest Albums Ever mentioned Different Class I privately cheered, because it felt like we freaks were in the citadel, if not storming it. When a review of This Is Hardcore mentioned that ‘it would always be difficult following an album as drop-dead genius as Different Class’ I hurrahed internally again, because it meant I had got (in both senses) a work of genius. Different Class portrayed a future more accurately than I would sometimes like to admit. Pulp’s songs, and in particular some of their sorely underrated b-sides (from ‘Deep Fried In Kelvin’ to ‘Seconds’ and ‘We Are The Boyz’) all were shrinkwrapped worlds of despair and lust, illuminated by sepia-tone streetlight.

Like all great works of art it feels more mine than anyone else’s, and its genius lies in the fact that I am sure many others feel the same.

An Unpublished Chapter from How I Left The National Grid: A Walk Into Manchester

When my novel, How I Left The National Grid, was accepted for publication a scene that I considered important didn't make it into the book for contractual reasons. 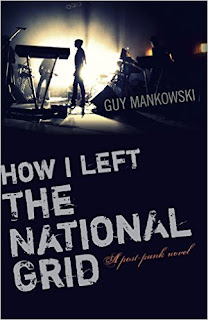 In it, the journalist Sam walks from the Hulme Estate, along the side of the motorway and into the heart of Manchester. It’s a perilous journey that I took myself on a wet Manchester afternoon to research this chapter. Two characters, both trying to ‘find’ the vanished singer Robert Wardner in their different ways, undertake a journey that takes them past the historical layers of the city. Their conversation covers topics as diverse as A Clockwork Orange, Margaret Thatcher, Brutalist architecture, the history of the synth and New Order.

I’ve mentioned this scene in a few talks and lectures, and having had very kind feedback for it from some of the post-punk musicians I interviewed whilst working on the book I thought this might be the place for it-

How I Left The National Grid can be bought from here-